“ALLDAY/EVERYDAY” I – ARTISTS FROM NORDRHEIN WESTFALEN AND ISTANBUL 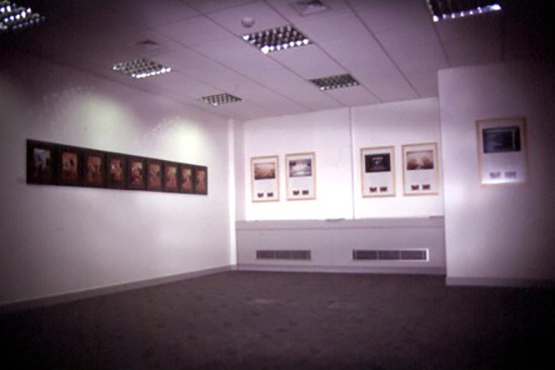 ALL DAY EVERY DAY I

First of all this exhibition attempts to show the current art production in Istanbul and Nordrhein Westfalen with a selection of relatively young generation of artists. The artists have been invited by me with the kind support of advisers in Düsseldorf and Cologne*. Consistent and integral production of the artists related to the concept of the exhibition facilitated my task. The concept of the exhibition was born out of my observation since I started to work as the curator of the exhibitions in the WestLB, Istanbul building. For the first time I had the opportunity to make an in-depth-examination of the office life. Situated on a hill in the recently developed district, the building is far away from the heterogene centers of the city overlooking to the main highway and the ultra-modern business center with its multiplying skyscrapers. Inside it is quite and strictly proffessional. When one enters the building and the electronic doors are closed, one feels to be isolated from the world outside or even from one’s own daily realities. The minimalist interior decoration accentuates the serenity. There is an inevitable division of inside/outside. Inside, there is the “concrete reality” of the business world with its detailed systems and strategies. Outside there is the so-called “real world” with its numerous differences and ambiguities related to the city and to the private lives. All day long and every day the people work and live in these excessively self-confident building and leave their all day/every day existence, responsibilities and tasks behind.

If one of the objectives of this exhibition is to fuse this outside/inside dichotomy, the other is to survey this division. Here, artworks will serve as mediums shifting from one side to the other, in order to signify the infinite details of human factor/existence within the man-made systems.

Since the prehistoric times the art has embraced every day realities and reflected it as representations with different styles, forms and aesthetics. The landscapes, still life, interior paintings display all kinds of daily life tasks, functions and objects, which also indicate geographical, cultural and individual differences. At all times the artist was a keen and sensitive observer of the daily life with particular interest in objects and habitudes which signify political, social and cultural facts and transformations.

All day and every day issues have not only been the subject of the art of 20Th century art, but gradually it became the subtance and the process to be articulated within. The pioneers were Picasso and Braque. Around 1912 Braque invented the papier collé technique in his search for freeing the color of its traditional function of representing the reality. Picasso founded the technique of collage by adhering different materials on the canvass surface and also invented Cubist sculpture, which was an assemblage of every day materials. At the same time in New York Marcel Duchamp was introducing his ready-mades which have widened the traditional canon of sculptural materials to various new materials from the every day repertory. The Hannover Dadaist Kurt Schwitters at first created his poetic collages with every day refuse and waste and later he constructed his enviromental collages, which became the basis of the installations in the 80’s and 90’s. In the 50’s and 60’s Neo-Dada movement provided important resources for fusing art and every day life under the titles Nouveaux Réalism and Fluxus. In the late 1960’s the formalism of modern art was dissolved within the context of radical transformations in economy, politics and social life. The art had to reflect the transformation in every day life, which was inevitably being conducted, influenced and controled by new communication technologies and consumerism. In Germany, with his expanded art concept Joseph Beuys has actually achieved the unity of art with traditional and practical issues of life. In England, Richard Hamilton’s collage “Just what is that makes today’s homes so different, so appealing?” has summed up the iconographic material of Pop Art by depicting the every day life of the consumer. In USA the trivial culture became the mythical environment of Pop Art in the works of Rauschenberg, Warhol, Rosenquist, Lichtenstein and others. The Minimal Art production in the 70’s seems to oppose the every day turmoil with Donald Judd’s iron cupboards and Dan Flavin’s neon tubes, which are proposals for a new order in daily life. Throughout 80’s and 90’s all this accumulation opened the way to a new inquiry in defining the borders between art and life and built a substructure for new forms of production. On the other hand, even this kind of art was confined to the limits of the museums, art galleries and other institutions. Although individuality guides their form, content and aesthetics, the sublime paintings and sculptures have not been the immediate products of this freedom; once they were in the museums they were distanced from the viewer and his/her every day realities. The culture industry always regulates the conditions of encounter between the artwork and the public. Therefore, in the 90’s the artists, confronting these regulations and confinements produced works that are not dependend on a given space, but mobile, rootless and multidiciplinary. These works embraced all sections of life; explicitly all the things that was considered as insignificant, common and manifold within the modernist criterion. At a crucial moment, the limittless desire and obsession of the artist to investigate and question coupled with the post-modern deconstructivism and shifted the infinitesimal details of every day life into focus. Yet, as much as the every day life of the individual may seem common, it is meaningful as his/her private sphere. It is this “private sphere” that appears in today’s artworks, more often – due to the ever present anarchy in the nature of creativity – in the form of transgressive images, performances and momentum.

In Postmodernizm modernist individuality, seriousness and devotion left its place to a new playfullness, ecclecticism and indifference. Moreover, postmodern art enjoyed life as it is and welcomed the heterogenity of styles and saluted the simulation of every day life.

The computer and internet images of Özgül Arslan seem to be the direct images/documents of today’s dominant daily occupation. The most popular way of communication in the virtual world is the chat board. A special twofold language is being developed. While people freely express themselves in the unrestricted virtual domain, they also crave to show their mimics and gestures. A sign language is being created and added to the written texts. In the second photographic series, an inside-outside enigma is being narrated with a daily routine. A simply decorated and isolated room is photographed at different time spans. The significant elements are the computer, the bird in the cage and a woman occasionally appearing to work on the computer. The ambiguity lies in the outwardly isolation from the world and invardly expansion to the world. In this exhibition Inken Boje presents two series. In one of them utilizing various labaratory and printing photographic techniques depicts the different movements of human body. In this way Boje obtains “painterly” images as well as signifies the human body as a multi-faceted sculpture. The images bring forward the language of body, which in daily life is being articulated unconsciously, but gains significance in the office where human movement is limited. The other series reflect the outcome of her performance, leaving her footprints on wet pigments. Even if one can recognize the footprints, the image is abstract. Large minimalists photograph exempflies the kind of perfomance that accompanies these paintings. Esra Ersen‘s instant photographies of people at recurrent dinner parties encircled by different environments indicate a certain shared time within the every day life. A different kind of participation can be experienced during these dinners; a kind that cannot occure in other times. We know that one of the basics of consumerism is to bring people together – as extremely manifested in the shopping malls – to fabricate common life; however this is a programmed togetherness. Ersen attempts to present unprogrammed moments of togetherness; vivacious, excited, released, libertine, emancipated faces come into view within the atmosphere of wealth, prosperity and affluence. However, she has no intention to convince the viewer about the sincerity of these priviledged moments; she rather implicates that one can achieve a kind of affection. Tatjana Doll produces large-scale paintings that iconise the objects and signs of the every day. These objects and signs are handled as analogues of unavoidable necessities and regulations of economic systems, social life, every day and all day with which one has to compromise. Paradoxal is that at the same time one is inclined to disregard the superiority of these necessities and regulations. The giant envelope is a dubious example ; it is a necessary object, but at the same time a trivial piece of paper to be thrown away. Once upon a time an envelope was even a literary object. Now, the envelope is on its way to becoming an object of nostalgy; the letter may survive in the form of an e-mail…What is the significance of this iconised business letter envelopes? It is empty. An emptiness which is immediately associated to a fullness; because an envelope cannot be noticed without its letter. Mürüvvet Türkyilmaz known with her wall drawings and recycled paper installation, present a series of graphit on paper drawings. Simple and common furnitures such as table and chair are depicted as negative images. By rendering the objects as negative images within the graphite surfaces she puts a certain distance and alienation between the viewer and the object which transforms these furnitures into icons of the material world. However, there are delusive details in these drawings when one insists to get involved: there are missing parts. The briefcase has no locks, the chair has only three legs. Yet, these missing details cannot prevent the viewer to signify the object; they are only there to question the gaze of the viewer. Jost Wischnewski‘s guiding road signs printed on the surface of streets are directly indicating the outside within the concept of this exhibition. Streets and roads are essential elements of every day and all day in the sense that they are the connecting lines between the fields of attraction and that they are the infrastructure of the human motion and activity. The roads may seem to be fields of freedom where humankind tries to transcend its capacity of motion with the support of automobil technology and traffic systems. Roads may seem to be fields of speed where the motion is the real life and the real life is like a theater stage. In both cases, one is doomed to by-pass the connotative subtance of life for the sake of premeditated de-territorialization. Roads are fields of confinement; they have instructions, regulations, commands and guidelines which one obediently follows every day and all day. Saskia Niehaus‘ water colors and Martina Kissenbeck‘s drawings and sculpture represent the poetic and meditative dimension of this exhibition and resourcefully relate to the inside/outside dichotomy / harmony with their spirituality. In her delicate small works on paper, Niehaus has invented a realm with mythological and surrealistic connotations employing the animal as an element of allusion. The bears, birds, fishes horses, cats together with men and women are not assembled in definite scenes, but float in the space as if only to invoke a trace of the real world. Niehaus’s drawings are introspective and more complicated than they seem. For this exhibition Niehaus’s watercolors meet the desire of the viewer for sublimity and refinement in juxtaposition to the triviality of every day. On Martina Kissenbeck‘s ink drawings with abstract motives and in the Kokon sculptures intimating a figure one can behold the female figure. The viewer is moved to look for the whole form. These subtl and vibrant drawings and sculptures reminds the viewer that art is an illusion of life and one can confuse it with the real thing. And, this confusion is an invigorating way of deepening our spiritual investment in art.

BÜTÜN GÜN / HER GÜN I