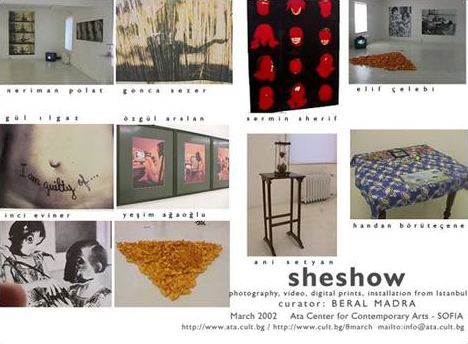 in collaboration with 8th March Group:

When I was invited to curate an exhibition at the ATACenterfor Contemporary Art in Sofia, I had the irrepressible impulse to have a show exclusively with women artists. This might have seemed quite old-fashioned, obsessive, and feminist approach, but encouraged by the enthusiasm of the invited artists and my partners in Sofia, Raimonda Mudova and Maria Vassileva, I took the risk. Doubtlessly the idea was based on two facts: not only the date of the exhibition would be coinciding with the International Women’s Day, an accomplishment of socialist women at the beginning of the 20th century, but also a group of women identifing themselves 8th of March Group have been realizing significant exhibitions in Sofia. This could be an occasion for an encounter between the women artists of Sofia and Istanbul.

Bulgaria andTurkey is going through a period of transition. Nevertheless, the struggles that women have to wage for securing their political, economic, and cultural positions in these still predominantly traditional societies are much more difficult compared to that of men. We also know that theory and practice in art is traditionally male-dominated; however women artists are producing notable and arresting works.

Post-modernism was an ally for female artists; yet it has never been too easy to change the status quo. For opening up the field of the social for the hitherto excluded subjects–among them are women of all classes and professions–dominant meta-narratives has to be challenged and not only the modernist gaze of the audiences needs to transformed but also the institutions need to reconfigured. Without doubt, such a vision of a pluralist society is yet to be realized. However, the so-called traditional female qualities of sharing, communication, and flexibility and the desire to collaborate are becoming more and more important (1) and I believe that they have a great deal to offer in contribute to the fundamental changes that are already beginning to take place in our countries.

In the historical background of our territory, during Anatolian Civilizations before Christ, in Byzantiumand during the Ottoman Empiresome upper class women are mentioned to have an episodic central role in the society. I will refer here to a historic event between 8th and 9th century during the period of iconoclasm inByzantium that will allegorically correlate to the Orthodoxy and to the position and identity of women in the collective memory of our societies. InByzantium, women of all classes had opposed the official politics of the state and have played a militant role in maintaining the worship of icons. When in 726 or 730 the great icon of Christ, which was displayed on the Chalky Gate of theGreatPalace, the women have rebelled and demonstrated in the streets ofConstantinople. Two empresses Irene and Theodore have restored the worship of icons around 850. What was the reason of this attachment to the icons? The women ofByzantium had a very limited role in the society and they were confined to their homes and daily occupations. Icons were the only private way to practice their religion. As a result, iconoclasts have acquired anti-feminist view and even questioned the role of Virgin Mary! (2).

Even though we cannot speak about a calculated women’s art movement inTurkey, we can distinguish a definite emergence of women artists since the beginning of 1980’s. And this emergence never had the distinct form of women coming together and exhibiting their work in solidarity; on the contrary from the beginning, women artists were invited to artists associations and exhibitions organized my men artists. Similarly we cannot define a feminist avant-garde art during the early and late modernism; feminism or a kind of women’s identity in art was not politically manifested in art works. Early modernist like Hale Asaf, late modernists like Sükriye Dikmen, Fahrel Nissa Zeid were not so marginal in their art and were not exposed to discrimination; they were too minor in number to be considered as rivals for men. Neither in the late 70’s when Füsun Onur produced arte-povera-like fragile installations, nor in the 80’s when Nur Koçak displayed her fetish-object paintings, Jale Erzen and Hale Arpacıog˘lu have painted in neo-expressionist style, the women artists’ pursuit of individuality and exploitation was noticed as a feminist challenge. After the first two International Istanbul Biennale, Ays¸e Erkmen, Gülsün Karamustafa, Canan Beykal, Handan Börüteçene, I˙nci Eviner have presented their conceptual and post-modern works. Feminism or women’s identity only step by step became the principal site for struggle in art. Beginning of 90’s there are many success stories of women artists such as Hale Tenger, S¸ükran Aziz, Canan Tolon, Ebru Özseçen, Esra Ersen, S¸ükran Moral. Since the end of the 90’s women artists from different generations and backgrounds are producing surprisingly striking works. Others who are gaining recognition – among them, Gonca Sezer, Canan S¸enol, Özgül Arslan, S¸eyda Cesur, Elif Çelebi, Neriman Polat, Gül Ilgaz, Sermin Sherif and many others – are challenging and dealing with patriarchal family structure, sexual repressions, child and women abuse, media influence on women and women as a fetish-object in the welfare society.

Modern art was considered to be elitist and have failed to address the political.   Post-modern art is also too sophisticated to be perceived by the official and private institutions that are supposed to fund art and what is more, not only the women’s work in art but also art by male artists is being devaluated and ignored as a source of political protest.  On the other hand, who and what can compete with the commodity and media culture and gain ground? Yet, the women artists no doubt suffered of being women in a patriarchal culture, of being excluded from decision-making positions, of being discouraged in realizing their projects and ideas.  Art was not the field for feminist debate and is yet to become one. Most of the women artists have gained their firm position through their increasing attachment to the international art world.  At present, even though the middle and lower class women in Turkish society are still marginal players and exposed to male dominance, feminism in art appears to be passé.  The middle upper class intellectual women–women artists (and curators) are included into this class–have learned to act strategically and to play according to the rules of the game.
The title of the exhibition is one such strategy: Given the general tenor of the artists’ works, it aims to subvert the current status quo for the advantage of an exhibition with women artists.  Tolerating the attention and interest of the public to the entertainment world and fulfilling the expectations of conceited audiences I mockingly entitle the exhibition Sheshow(with obvious allusion to Peepshow).  Challenging the ubiquity of stereotyping in the media industry, I wanted to draw some attention to the continuing exploitation of the image of woman under the aegis of global capitalism. The works of the artists will do the rest.

Kindly translated by the renown poet Georgi Pashov, Yes¸im Ag˘aoglu’s poem “They came” was displayed as an installation of 1000 pieces of yellow paper. The papers were folded as ships and aeroplanes in reference to war and presented to the audience to be consumed.

The youngest artist in the show, Özgül Arslan has documented her 24 hours performance dealing with the computer and virtual space in an attic room, paradoxically surrounded by a bird in a cage and plants. Entitled “On Line”, 14 photographs look like a “photo-play” of an obsession breaking the connectivity of the individual from the real world. Handan Börüteçene’s “My Mother’s Show” is a tribute to her mother who has emigrated from the Balkans. She invited the sisters and friends of her mother to embroider a tablecloth which belonged to her mother and basted the photographs of this workshop together with a watercolour she made in 1962 and a print of her mother’s hand on the same tablecloth. Neriman Polat and Elif Çelebi with their video-loops guide the gaze of the viewer to the TV-room culture. Polat sums up the libidinalization of the TV in a simple motion of a woman walking towards a TV, sitting on it and simulating masturbation. Elif Çelebi juxtaposes toy animals as still life to animal animation as TV-life.

“Terra Incognita”, a series of digital ready-made photographies of Inci Eviner are dated 1998. Two of these series “Healing” and “Sisterhood” show the stereotype life-style and values of a welfare community. Eviner attacks the conviction of the viewer and creates a teasing alienation by replacing the heads of the persons with fish heads. A performance documentation of 8 photographs, installed in two rows show Gül Ilgaz marking herself with the sentence “I am guilty of…” The viewer is urged to perceive the act in two ways: It might be a collective confession or it is an attempt to make a clean sweep off for all the sins and accusations.

Sermin Sherif’s performance documentation of “Scarlet Scarf” was exhibited in 49th Venice Biennale. With a scarlet scarf Sherif has made almost 70 different forms of head cover, each evoking associations to different identities. She scrutinises the gaze of the majority on the head covering or veiled female identity particularly associated with Islamic convictions. The viewer can exploit Ani Setyan’s hourglass filled with terra-cotta human figurines. The fragmentation to the point of disintegration implements a nihilistic approach to the female identity.

Likewise Gonca Sezer’s sequence photographs of her shadow on a wall of reeds insinuates to the flux of life and to the reality and dream; but connects us to an illusion of something wonderful.